What is the difference between diggers and excavators? 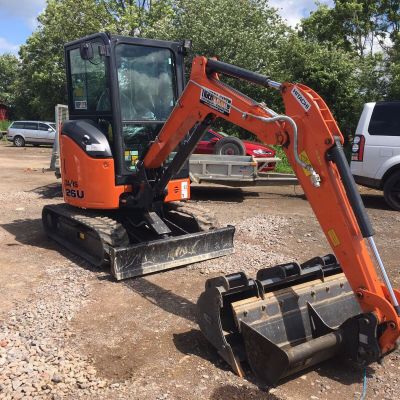 There are many types of diggers available for a variety of different projects for both residential and commercial construction and renovation. However, unless you have experience in the world of construction and plant machinery, you may have come across excavators and wondered ‘what on earth are they?’.

What is an excavator?

Excavators are heavy construction machinery that consists of a boom, dipper, bucket and cab on a rotating platform known as the house. They are perfect for topsoil excavation, which involves removing the top layer of earth. From creating space for ponds and swimming pools to digging out a space in which to place the foundations for a building, excavators can be used for a variety of reasons.

Is a digger the same as an excavator?

To put it simply, a digger is a nickname for an excavator. Excavators have the ability to make a large hole or channel in the ground and carefully remove the earth from that area. Although you may have heard of diggers, excavators are exactly the same thing. They are often confused with power shovels due to their similar look.

What is the difference between a power shovel and an excavator?

What types of digger do you stock at Tiger Plant Hire?

At Tiger Plant, we stock a variety of diggers to suit most needs. The smallest excavator we stock is a micro excavator. These are small enough that they will fit through most doorways making them perfect for patio work and rear garden construction.

If a micro excavator sounds too small, then we also stock mini excavators. The next step up from micro excavators, they are great for plots with restricted access or single plots. Offering more comfort for the driver, alongside more power, they are mostly used for patio & landscaping projects by our customers.

The midi excavators we stock offer even more power and digging depth. Unlike micro and mini excavators, they are cabbed which allows for even more comfort and protection from the elements. They come with more features than the smaller models and their increased power allows for more rigorous site work.

The largest excavators we offer at Tiger Plant are crawler excavators. Used for heavy civil works and smaller lifting operations. Due to their large size, they can move large volumes of earth and dirt incredibly quickly.

What do I need to know before hiring an excavator?

If you are planning on hiring an excavator for construction work, you need to ensure that you have both planning permission for the work you are carrying out and insurance to cover any eventuality that may be outside of your control. Make sure you have got the right excavator for the job and speak to a professional if you are unsure. By getting an excavator that is too large for your project, you run the risk of causing damage to the surrounding area. However, if it is too small then it may be unable to handle the job at hand.

At Tiger Plant, whatever construction work you are doing, we have the plant machinery for the job. Save money, time and hassle by hiring your machinery and hire an excavator from us today. Not sure which excavator would be the best for the job? Get in touch with our fantastic team. We would love to hear from you!

For machine hire info; call us now on 01793 886444 or email hiredesk@tigerplant.co.uk. Our friendly team are waiting to answer your machine hire questions!

It is relatively cheap and easier for you to have your own hired in plant insurance. Check with your business or home insurer for details. However, in the event that you dont have any cover we can offer you a theft and accident waiver policy for a small cost although you will still be liable for any excess due on your chosen policy.

We offer discounts for longer term rentals and long term customers, as well as account terms. The easiest way to get the best price for our top quality machinery is to call us on 01793 886444